skip to main | skip to sidebar

Upon arriving back in the UK last week at Heathrow (and being a little too wrapped up in seemingly important things like whether the plane would land in the snow or if my train would be running) I was immediately greeted and numbed by the horrific and shocking news reports that followed after the Haiti Earthquake. As the magnitude of the disaster continues to grow by the day, I was very keen (like most people) to do 'something'.
Thus 'The Haiti Project' - a charity download album - was born. Within a few days of sending emails and calls to my nearest and dearest friends an album quite literally 'came together'. 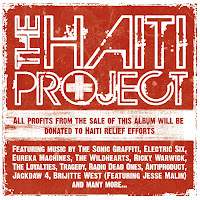 The album is spearheaded by the anthemic debut track from 'The Sonic Graffiti', a new band from LA put together by Ginger Wildheart, Billy Morrison, Michael Butler & Scott Lipps. The track entitled 'Mystery Number' was recorded at Matt Sorums studio in August 2009 & was produced by the legendary Mike Clink.
I'd like to personally say a big thankyou to Ginger, Billy, Michael, Scott & Mike for donating this exclusive track, and allowing 'The Haiti Project' to (hopefully) raise even more money.

The tracklisting is as follows...

1) The Sonic Graffiti – Mystery Number (Exclusive)
2) Eureka Machines – Being Good Is Ok, But Being Betters Better
3) Electric Six – Newark Airport Boogie
4) Jackdaw 4 – Jesus Wants My Soul Back
5) The Loyalties – Sofa Surfin’ UK (Acoustic)
6) Antiproduct – When We Find Love
7) The Organ Beats – Happy Birthday/Come On Home
8) The Wildhearts – Unbroken
9) Tragedy:All Metal Tribute To The Bee Gees – Nights On Broadway
10) Radio Dead Ones – Take It On Trust
11) Ricky Warwick – Love Owes
12) Brijitte West (Feat. Jesse Malin) – How To Be Good
13) Moi? – This Is All That I Wanted
14) Laika Dog – Piano Song
15) Sorry & The Sinatras – Riverside
16) Children of The Unicorn – Nightshark

All of the money will be donated directly to the ongoing relief efforts and you'll end up with 16 great tracks. Good deal.

The download side of things are just being sorted out as i type (a big thank you to Musicglue for their help), and we are hoping to go live on Monday.

Links, banners and information concerning where to purchase will be sent out as soon as we get them.

As soon as we do, I would love for everyone to spread word around the internet world  via their twitterings, facebookings, myspacings, bloggings and other 'ings'.  Lets raise some money.

Gav :)
www.twitter.com/gavmccaughey
Posted by Gav at 5:44 AM